How Raven Created the World 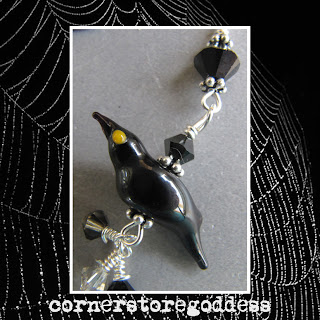 In the beginning there was nothing but water, darkness, and Raven.  Raven flew through the darkness with a bag that he had hung around his neck.

Raven flew and flew.  As flew, he grew tired, and so he removed a rock from his bag and dropped it into the sea.  That rock became the first land.

Raven flew down to the land to rest. As he sat, he removed more stones from his bag and dropped them into the water.  Those became the rest of the land.

Feeling rested, Raven picked up his bag once more and took to the sky.  But soon he grew tired again.  He perched on a rock and removed more items from his bag:  the fir, the pine, the spruce, the redwood and all the trees of the world.

Then he removed the wild strawberry, and the huckleberry bush, the grasses and plants of the world and those of the sea.  He scattered these across land and water so they, too, could grow.

Raven placed the bag back around his neck and started to fly again, through the darkness.  When he tired, he perched on a rock and reached into his bag.  This time he pulled out the animals of the world: the wolf, the salmon, the eagle, the bear, the deer, and all other animals of land and sea.

Raven looked around him at the world he created.  It was a good world - one in which there was much peace and happiness.

But Raven could feel something else inside his pouch.  He looked and saw that there was one thing remaining.

Raven reached into the bag and removed man.  Raven placed man on earth to care for and respect all of Raven's creations.

The ravens in these earrings were crafted by Lauren Bramble of Crowbirdie Beads.  The earrings are wire-wrapped with sterling silver wire.  The charm is sterling, as well.  The earrings drop approximately 1-1/2" (3.81 cm) beneath sterling leverback earrings.
Cost is $65.  Shipping within the US and Canada is $2.00.  Elsewhere, shipping is $5.

More Halloween delights can be found at the EHAG Emporium.

Posted by Cornerstoregoddess at 6:00 PM