A Wondrous Week of Halloween Earrings

I found them on their break (as usual).  Good thing they don't have a sign that says HALLOWEEN EARRINGS AT WORK" or people would drive by and point and mock them. 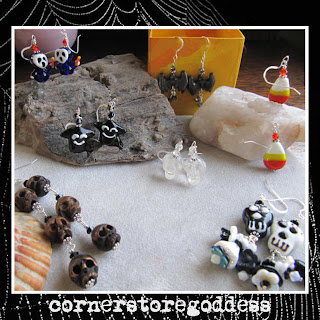 Though they were on a break, they were more than willing to chat... as long as I plied them with wine and headpins. 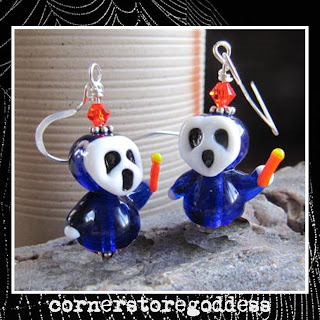 The ghouls, as it turns out, were using their down time to practice their karaoke.  In case you didn't know, ghouls LOVE karaoke and can often be found elbowing their way into karaoke competitions, especially when there are prizes involved.  I left them working on the bridge to "Ghouls Just Wanna Have Fun." 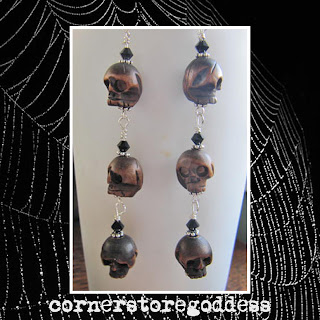 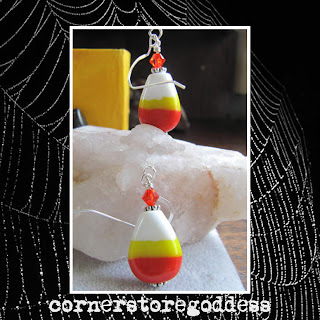 The candy corns were posing.  They're apparently working on a campaign to have them included as a food group on the food pyramid. 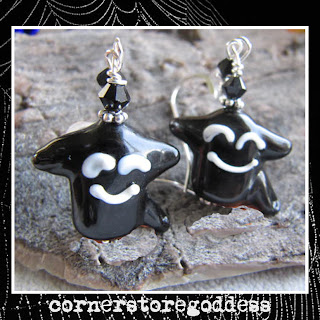 The goblins were writing the charter for the Goblin Anti-Defamation League.  They insisted that goblins do not eat rancid flesh.  Well, it's flesh, but it's not really rancid.  I believe "well-aged" was the term they preferred.  And that stuff about hiding in chimneys and woodpiles?  Largely exaggerated. 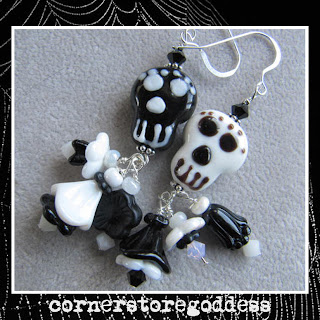 The Día de los Muertos  skulls were counting the days until the Día de los Muertos, looking forward to the feasting and feting they so richly deserved.  But they were unsure how to calculate how many days there still were.  I gave them a complex formula (take Halloween and add 2) and left them working on the math. 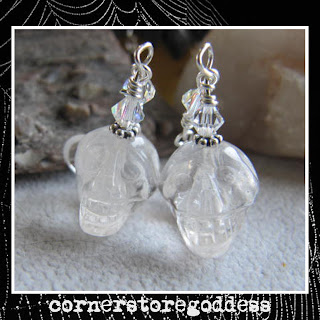 The crystal skulls were reminiscing about their days with Indiana Jones, and didn't have time to talk to me. 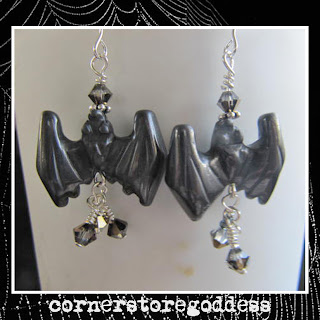 By the time I reached the bats, they said they were done hanging out.  They turned themselves upright and life returned to normal in the Land of Halloween Charms.

You can purchase the whole set of Halloween earrings for $100.  But they'll probably deny having the conversations we had today.

Shipping and Handling is free within the US and Canada. Contact me for rates shipping elsewhere in the world.

Earth Day is Every Day

"We do not inherit the earth from our ancestors. We borrow it from our children."
~Native American Proverb 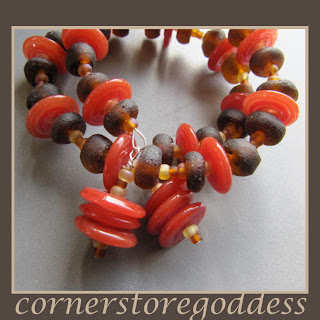 "Never doubt that a small group of thoughtfully
committed citizens can change the world.
Indeed, it's the only thing that ever has."
~Margaret Mead 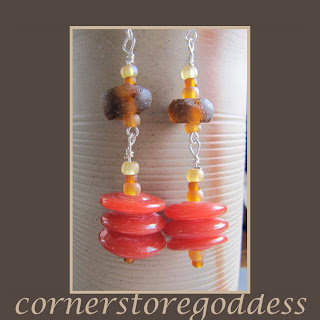 "Those things are better which are perfected by nature than those which are finished by art."
~Cicero 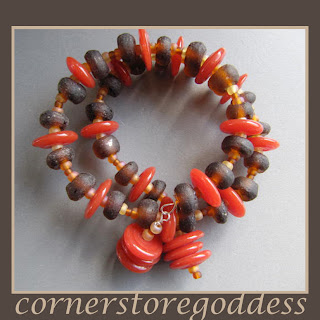 "There are no passengers on Spaceship Earth. We are all crew." ~Marshall McLuhan 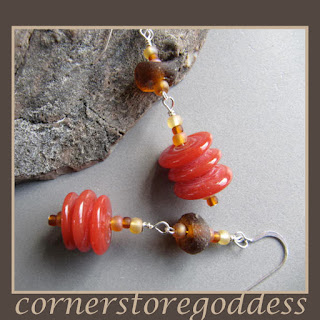 "I'm not an environmentalist. I'm an Earth warrior."
~Darryl Cherney 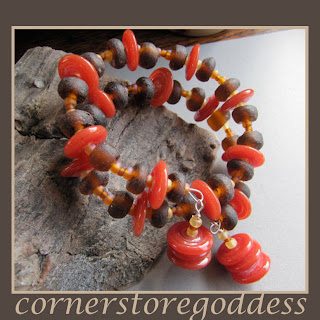 "I would feel more optimistic about a bright future for man
if he spent less time proving that he can outwit Nature
and more time tasting her sweetness
and respecting her seniority."
~Elwyn Brooks White 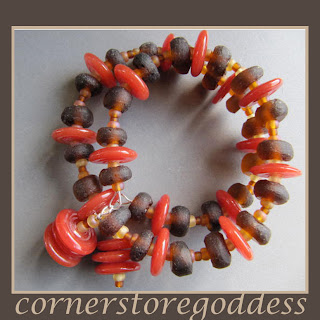 "There are no boundaries when it comes to protecting the earth that we all live on."
~ Catherine Pulsifer
Earrings and bracelet of recycled glass here.
Posted by Cornerstoregoddess at 4:00 PM No comments:

Don't You Want Some Bunny to Love?

That nose, that bunny nose will twitch and twitch
Telling you to soil-enrich...

Bunnies who will not eat your garden can be found here.

Posted by Cornerstoregoddess at 4:00 PM 2 comments:

Want to win a charm?  "Oh, that will happen when pigs fly," you say.

To enter, all you have to do is leave a comment and tell me how you use my charms, or how you would use one of my charms.  A charm bracelet?  A zipper pull?  A tiny petting zoo?  A shrine?

(For those of you who read me on networked blogs or on the Hive, please come over to the "real blog" (http://cornerstoregoddessjewelry.blogspot.com/) and leave your comment.

On April 4th, at 6 PM PST, Uncle Buck will pull a winner from the list of comment-ees.

The lucky winner wins a lucky charm.  (One of mine.  Not the cereal.)

You can see more charms, for inspiration, right here.

The continuing events in Japan remind us that help is still urgently needed, so here are my maneki neko earrings to benefit Japan.

The Maneki Neko has long been a symbol of protection in Japan, as well.  There are many stories of the maneki neko (some of which you can find right here in the blog), in which a cat saves a monastery, a lady of the evening, sailors, Santa's Elves, an emperor, and more.


Some back-story:  When the earthquake a tsunami hit two weeks ago, I began to ponder a way to help Japan, and created Maneki Nekos for Japan ~ good fortune kitty earrings whose proceeds would benefit various agencies aiding Japan.  The traditional Japanese Lucky Cats did their job.  So far, together, we raised $1030 for various relief organizations: Red Cross, Save the Children, The International Medical Corp., the Japan Earthquake and Tsunami Relief Fund, the Salvation Army, MercyCorps,  Peace Winds Japan, Doctors Without Borders, Japan Earthquake Animal Rescue and Support, and World Vets

There are many maneki neko earrings available here on the blog.  The entire $30 purchase price goes to your chosen charity.  I only ask for a $3.50 shipping/handling fee to cover the cost of shipping and the inevitable PayPal fees.  For those who do not wear earrings, I can make charms, zipper pulls, and cell phone charms, too.  There are also some bracelets and necklaces available on this blog.

If you see a pair of earrings you like, leave a comment here, or message me on FaceBook.  (Messages are not seen by the public without me approving them, so your contact info is secure.)  I will send you an invoice and ask you to choose your charity from the list above.  When you pay, I will ship your earrings, send the money to your chosen charity, and send you confirmation of the donation.


The need in Japan in great, and I am very proud that so many of you have done so much to help. 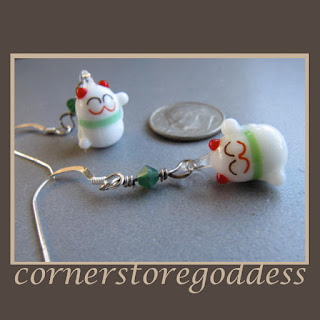 Posted by Cornerstoregoddess at 11:48 AM No comments: