The Legend of Santa Skelly 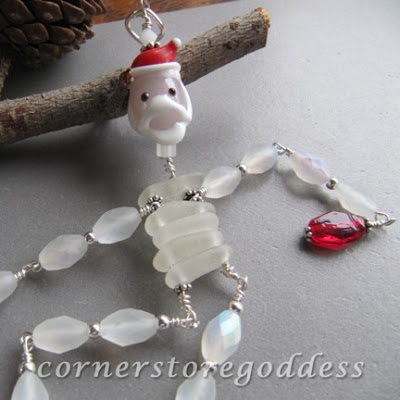 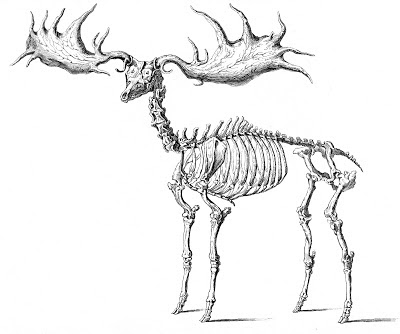 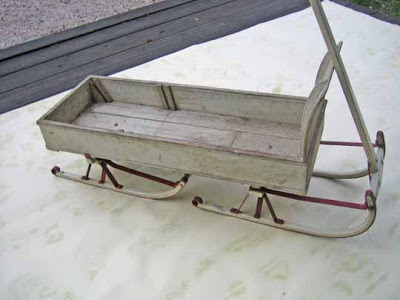 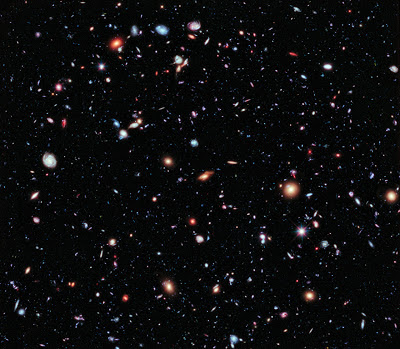 ...bringing presents to all the good little girl and boy skeletons. 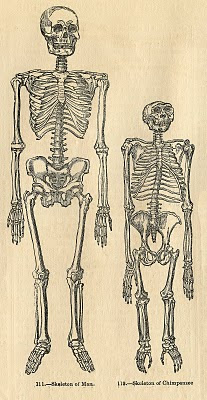 When he is finished... 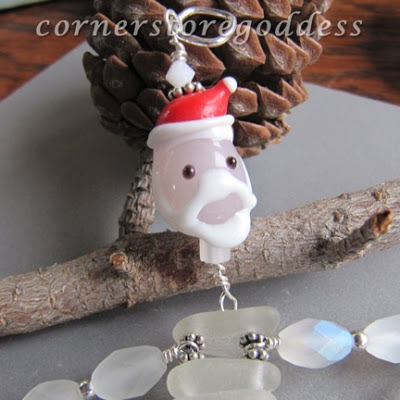 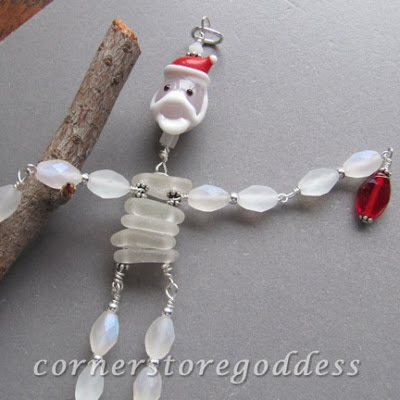 ...and gives his reindeer a treat. 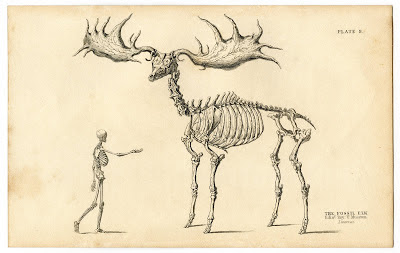 He takes a little nap... 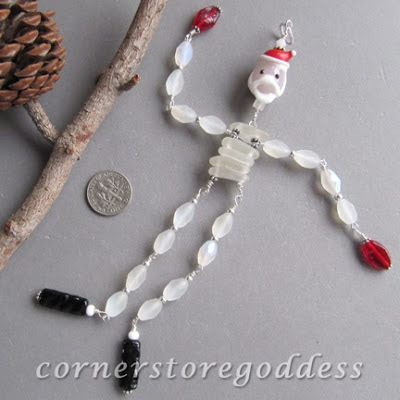 ...and spends some time looking up at the night sky. 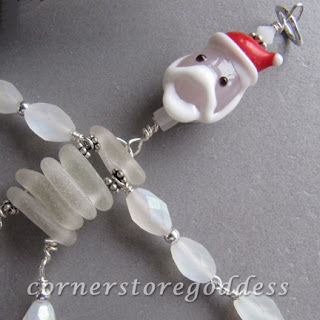 Then he decorates his tree... 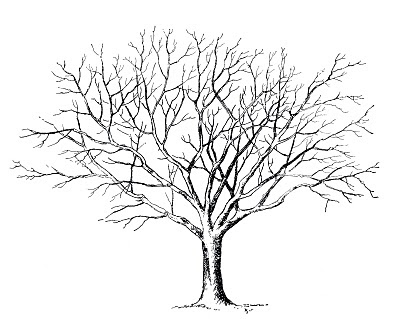 ...and wishes everyone a very merry skelly holiday. 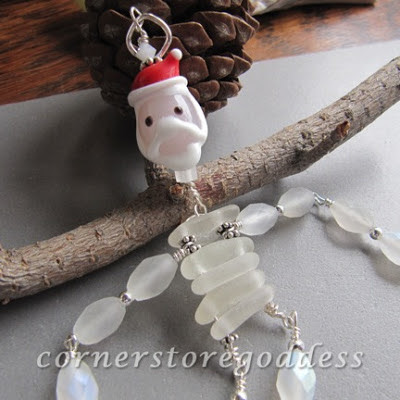 Santa Skelly available on etsy, where he hangs out with his skeleton friends.

Reindeer, skeletons, and tree compliments of the Graphics Fairy
Posted by Cornerstoregoddess at 12:29 PM 2 comments: 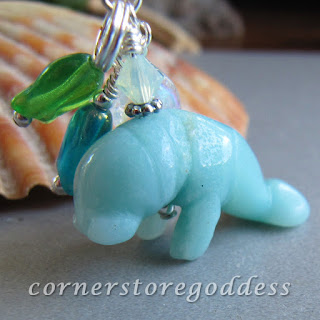 Lil Joe is a manatee who was plucked from a shallow river in Florida.  He'd been there, marooned and starving, for weeks.  He was so dehydrated and underweight that you could make out the bumps and knobs on his head.  You could count his ribs.

He was taken back to SeaWorld in Orlando, where he had been raised as an orphaned newborn.  And once there, he was reunited with Slip, who had been Lil Joe's aquarium mate.
The two manatees met nearly 20 years ago and toured the country together.  A couple of years ago, they were set free together.
Some backstory:
Lil Joe was first rescued from the Halifax River near Daytona Beach on July 30, 1989.  He was only a few weeks old, and weighed 42 pounds.  Lil Joe was only a few weeks old and weighted 42 pounds. With his mother presumed dead, Lil Joe was taken to SeaWorld, where he was bottle-fed. 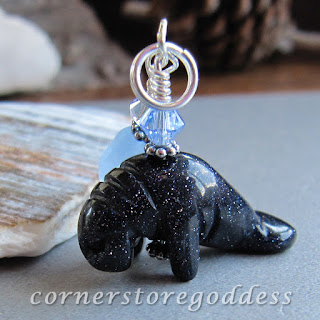 Slip was named after the marina spaces where boats dock.  He was born at SeaWorld on Nov. 22, 1991. His mother, Marina, had been rescued in 1979 and was SeaWorld's first bottle-raised calf. She died of complications three weeks after his birth.
The two orphans grew close, being raised in similar ways.  Biologists thought then that orphaned calves who had been reared in captivity would never learn the skills needed to survive in the wild. Instead they sent them off on a series of adventures, first to SeaWorld in San Diego and then to the Cincinnati Zoo & Botanical Garden, where they remained for four years.  By the end of their stay, Lil Joe wasn't so 'lil' anymore.  He weighed 1,950 pounds.
In 2009,Lil Joe and Slip were shipped to the Lowry Park Zoo in Tampa.  There, instead of a diet of 200 heads of restaurant-grade romaine lettuce each day, they were introduced to the kinds of river plants that manatees ordinarily eat.  They seemed to adapt well, and the biologists  were confident the two could be released.
So in February of 2010, they were set free at Blue Spring on the St. Johns River, a spot that attracts hundreds of manatees each winter. The two went their separate ways.  Perhaps they'd been aquarium mates for too long.
Lil Joe turned up a few months later, farther north in the St. Johns, where he was having difficulty dealing with the cold weather.  He was rescued, rehabbed and put back into the river several months later. Last year, as winter approached, he slipped out of his radio-tracking belt and disappeared. It was feared that he had died. 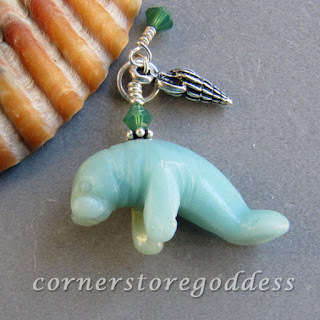 Slip, meanwhile, was hauled from Crescent Lake, which connects to the St. Johns River. He, too, was stressed by the cold.  He was taken back to SeaWorld Orlando, about 60 miles to the south.
It looked like Slip and Lil Joe would never romp together again.  Then, in August, a manatee appeared in the Little Econlockhatchee River — 25 miles upriver from the St. Johns, and a most unusual spot for a manatee. Eventually, a wildlife volunteer spotted an "R 5" brand on the his back, confirming it was Lil Joe. (Slip is "R 1.") State biologists suspected that the river had receded after the summer rains, trapping Lil Joe.
He weighed a mere 1,010 pounds.  For his length, he should have weighed st least 1,500 pounds. Gradually he was re-habbed, first with water, then with watered down mashed romaine lettuce and high-protein monkey chow.  A few thousand heads of romaine to go and Lil Joe should be back to a good weight.
And, once again, Lil Joe and Slip are doing their thing in Orlando. 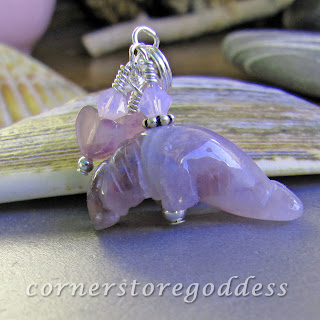 Read the whole article: Back from the wild, 2 old pals reunite at SeaWorld by Kevin Spear
The Cincinnati Zoo followed their progress for several years.  You can read about it here.
Tracking Lil Joe here. 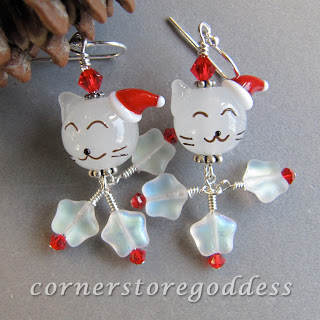 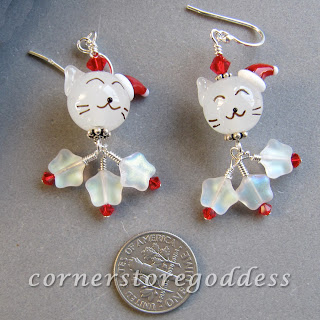 Fluffy, Smokey, Spots and Tiger
Pulling on the reins.
Cats are yowling, dogs are howling
All is merry and bright

So get set to roll in the catnip.
Santa Kitty's coming tonight. 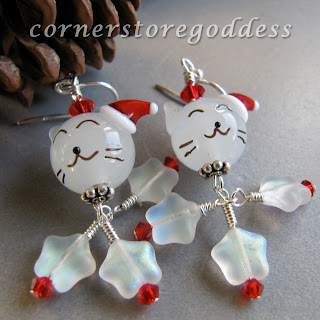 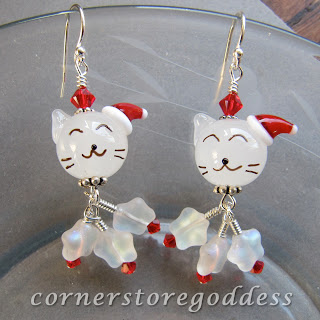 Posted by Cornerstoregoddess at 6:56 PM 3 comments: