Once upon a very long time ago (roughly 2200 years ago) a Greek king ruled over the land of Judea and over all the Jews living there. As you can imagine, this went over as well as, say the British ruling over the colonies, or the U.S. ruling over... wait. We won't go there. 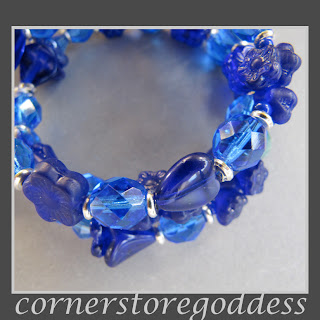 One of these Greek kings ~ Antiochus Epiphanes, to be exact ~ told the Jews that they could no longer pray to their God or practice their customs or study the Torah. Instead they needed to worship the Greek gods. As a reminder, a statue of Zeus was installed on the altar in the Holy Temple in Jerusalem. 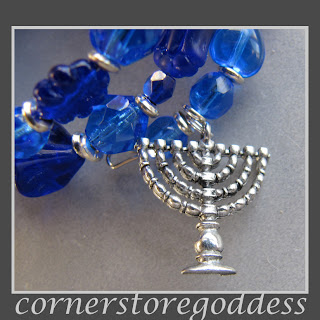 The Jews were very unhappy about this. So Judah Maccabee and his four brothers organized a group of rebels who became known as the Maccabees. Because they believed so strongly in their cause, the Maccabees were steadfast and took on armies who were bigger and stronger than themselves. (Another recurring theme in history...)

At one point, when they faced huge battle near Beit Horon, Judah told his army to have faith: God was on their side. (This is a rationale that has been used by many and should, perhaps, be a reason for unity rather than divisiveness between different groups... but we won't go there now.)

It took a long time ~ 3 years ~ but finally the Maccabees drove the Greco-Syrians out of Judea. At last they could reclaim their temple in Jerusalem. They scrubbed it and removed all the Greek statues and symbols. When they finished, on the 25th day of the month of Kislev, in 164 BCE, Judah and the Maccabees rededicated the temple. 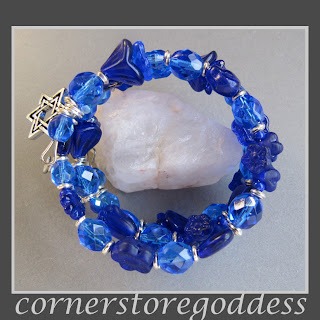 There was just one problem. It seems that, when the Greco-Syrians were there, they had ruined the special oil used to light the menorah. There was just one vat of the oil left, and that was only enough for one day. It would take a week to make more purified olive oil.

That's when the miracle occurred, if the Maccabees succeeding against huge armies didn't count as a miracle. When the Maccabees lit the menorah, it didn't burn for just one day, or even two days, or three days. It burned for eight days, which was enough time for the newly purified oil to be ready. 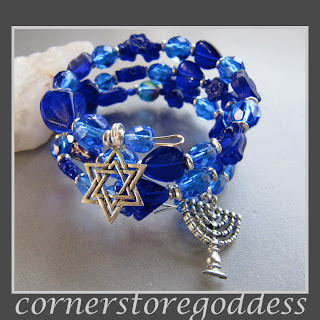 And that is why the Hanukkah Menorah has eight candles, plus the shamash, or helper candle that is used to light the other candles. 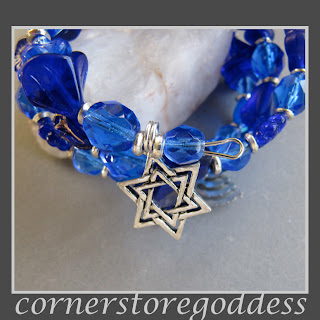 And that is one reason why Jews celebrate Hanukkah for eight days.

If you're wondering about the dreidel (sevivon in Hebrew), it's a toy but it's about miracles, too. The dreidel is a four-sided spinning top. Each side is printed with a Hebrew letter. These letters are an acronym for the Hebrew words נס גדול היה שם (Nes Gadol Haya Sham, which means "A great miracle happened there." This refers to the miracle of the oil that took place in the temple in Jerusalem.

The Chai symbol seen on the bracelet is the symbol for life. In Hebrew, the word chai (חַי) spelled by these two letters means "living." It is related to the term for "life," chaim, and also appears in the slogan "`am yisrael chai!" (עַם יִשְׂרָאֵל חַי, "The people of Israel live!").

The Hamsa, or hand, is often used as a protective amulet by both Jews and Muslims. There's surely a lesson in there.

But that is the end of today's lesson.

More information on the Festival of Lights

BrightandShinyThings to celebrate Hanukkah in my eBay and etsy shops.
Posted by Cornerstoregoddess at 4:00 PM