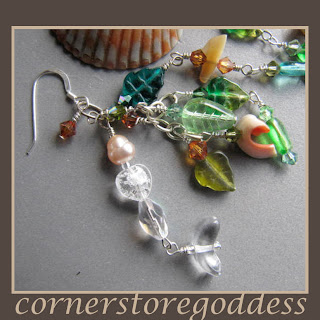 Once upon a time the Little Mermaid dwelt in an underwater kingdom with her father, the Sea King, her grandmother, and her six older sisters.  In the mermaid world, when a mermaid turned 15, she was allowed to swim to the above-water world and finally watch the humans and their places and spaces.  As her sisters grew up, each visited the world above the waves.  And when each sister returned, the Little Mermaid listened to their stories and descriptions, entranced. 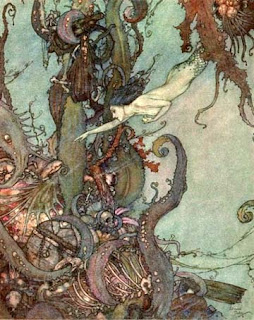 At last the Little Mermaid reached her fifteenth birthday.  When she swam to the surface,  she saw, in the distance, a great ship with a handsome prince standing at its bow.  She fell in love with him instantly, and when a storm hit and the prince fell overboard, she swam to his rescue, saving him from drowning. 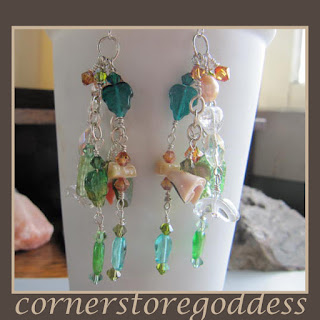 She carried the unconscious prince to the shore, and laid him on the ground near a temple.  Then she waited by his side, until a young girl emerged from the temple.  By the time the prince regained consciousness, the Little Mermaid was gone.  He never saw her face. 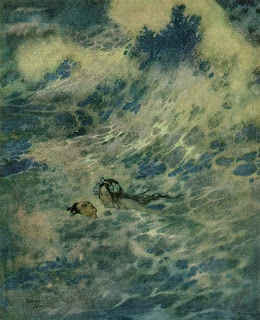 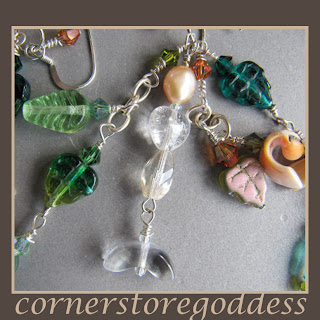 The Little Mermaid longed for the Prince, and thought that heaven was preferable to sea foam, so she paid a visit to the Sea Witch.  The Sea Witch was willing to make a deal: a potion to give the Little Mermaid legs, in exchange for her beautiful voice, which was reputed to be the most intoxicating in the world.

The Sea Witch warned the Little Mermaid: once you become human, you may never again return to the ocean.  The Little Mermaid drank the potion, which felt like a knife cutting through her.  But when she awoke, she had two beautiful legs, and was able to dance better than any human had ever danced.  There were drawbacks, of course.  Her new method of locomotion felt as if she were walking on sharp swords, and her feet bled terribly.

There was another catch, as it turned out.  The Little Mermaid could only receive a soul if she found true love's kiss AND if the prince fell in love with her AND married her, allowing part of her soul to flow into his.  Failing this, on the dawn of the first day of his marriage to any other woman, the Little Mermaid would die broken-hearted and would dissolve into sea foam. 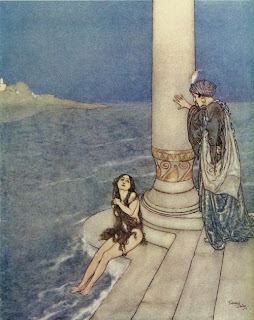 But luck was on her side.  The Little Mermaid met the prince, who was attracted to her grace and beauty, despite the fact that she could not speak or sing.  He loved to watch her dance, and so dance for him she did, despite her pain.


When the prince's father ordered his son to marry a neighboring king's daughter, the prince told the Little Mermaid he would not, for he did not love the princess.  He explained that he could only love the young woman from the temple, who he believed saved his life. 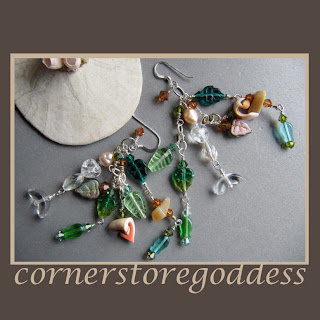 The prince proclaimed his love and a wedding was announced.  The prince and princess were married and the Little Mermaid's heart was broken.  She thought of all she had given up, of all the pain she had suffered.  She despaired, knowing her death was nigh.

But before dawn, her sisters crept to the shore and brought the Little Mermaid a knife the Sea Witch had given them in exchange for their long hair. If the Little Mermaid slayed the prince and let his blood drip on her feet, she could once again become a mermaid.  All her suffering would be over, and she could live a long life until she dissolved to sea foam.   Her sisters seemed to think this was a good plan and, with a wave, disappeared beneath the next breaker. 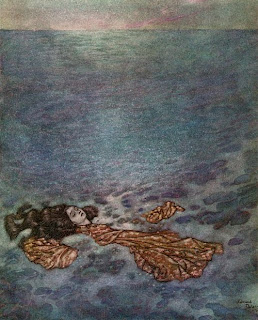 The Little mermaid was less enchanted with the plan.  She could not  kill the prince, who lay sleeping with his bride.  Instead, at dawn, she threw herself into the sea, where her body promptly dissolved into into foam.  But then, instead of the water around her, she felt the warmth of the sun.  She had turned into a spirit, a daughter of the air, and one who might someday go to heaven... or back to the beautiful home with the merfolk who loved her. 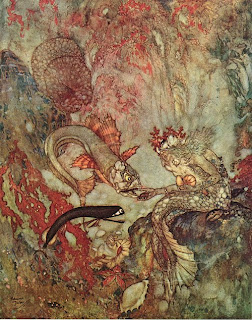