For those of you who have been with me a while, you've all seen pictures of my Eugene.  I call him my Mama's boy.

Eugene was a rescue.  I got him and his sister Gilda when they were itty bitty.  Here's a picture of them crawling on my sweetie, back in the day. 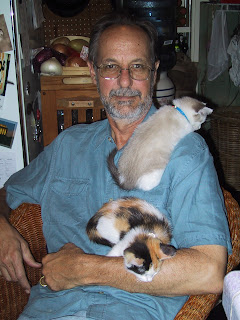 Since they were rescues, I always figured Eugene wasn't a real Siamese cat.  I mean, Siamese are some of the brighter felines.  Eugene was dumber than a bag of hammers.  He didn't do the Siamese voice.  But he did have those baby blue eyes. 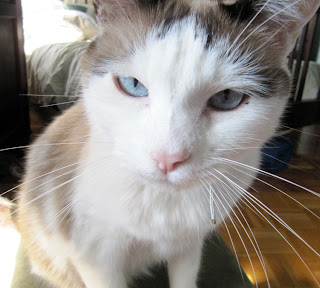 When they were little, Gilda and Eugene (we always liked to name sibling kitties for pairs of comedians, and these were Gilda Radner and Gene Wilder) were close.  They slept in the bathroom sink together (though I can't seem to find a picture of that now).  They hung out together. 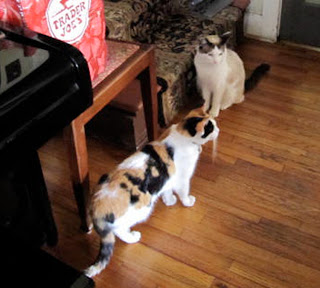 When they got older and were allowed to go into the back yard, Gilda proved herself to be a rather adept huntress, which is why she wears two bells.  Eugene, on the other hand, was more of a sunbather.  He'd lie in the neighbor's yard, on the little patch of grass, bagging beams.  You'd call him and call him and he would totally ignore you. 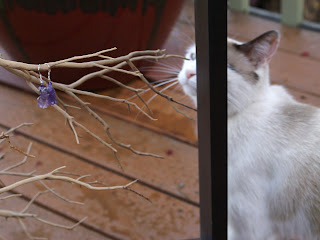 He was quite skittish.  In all his years, he never entered the house through the front door.  He was very suspicious of it, and wasn't entirely sure where it led.  Once he jumped in my son's window and had no idea where he was... so he hid under the bed for 24 hours. 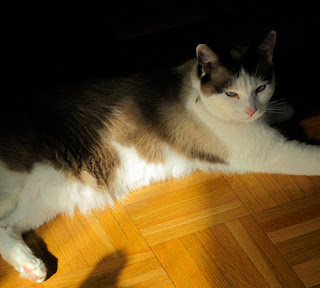 And outside, you couldn't catch him.  They way to get him in for the night was to sit in one of the kitchen chairs.  Pretty soon he'd stroll in and jump in your lap.  Then, eventually, he and Gilda would retire to the bathroom for the night.  If it was hot, they'd curl up in the sink.  If it was cold, Eugene would sleep on the tiger pillow and Gilda would sleep on the lion pillow. 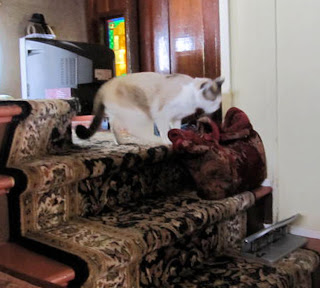 About a year ago, Eugene discovered my bedroom window.  It's on the top floor of the house, and the roof there is beneath the branches of an avocado tree where there kids' old treehouse still sits.  (I believe raccoons live there now.  I'm afraid to check.)  He jumped in, freaked out, and hid under the bed. 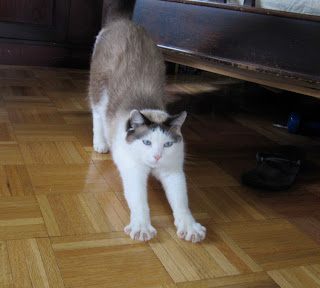 But then he discovered that my sweetie and I went up there at night, and slept on the nice soft bed.  After all those years of sleeping in the sink, the bed was looking pretty good to Eugene, and he took up residence there... to to dismay and aggravation of Gracie, who considered it HER bed and HER room. 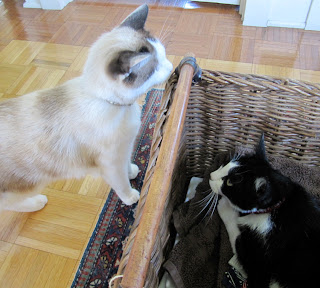 Every night Gracie would hiss and spit at Eugene and every night he would totally ignore her and stretch out on my side of the bed.  During the night he'd get up and snack, or jump out the window to go potty, but then he'd be back, hogging the blankets.  Gracie, who always looks irritated anyway, looked more and more irritated.

But it became the routine, and Gilda moved on, spending more and more time with the dog.

In the morning, Gracie would go to the kitchen to eat the best part of the fresh cat food before I took it upstairs where Eugene would dine.  He pretty much liked to eat and sleep all day.  Whenever I was in the bathroom, he wanted to come by and sit on my lap or rub against my leg.  When I ran the shower water to get it hot, I'd fill a bucket for water-saving flushes, but Eugene liked that 5 gallon bucket of water for his water dish, and I always kept it full for him. 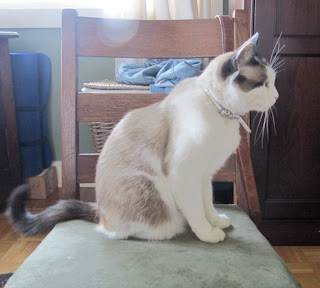 Yesterday I came home after a very long day, and went upstairs to find some comfortable shoes before I started  cooking dinner.  I saw Eugene lying on the floor, very still.  I called his name, hoping he was sleeping.  No response.  I nudged his tail with my foot and knew Eugene was gone. 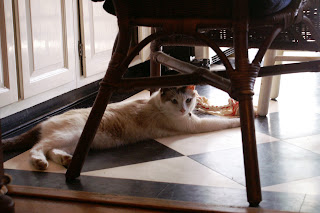 We're having him cremated.  But I like to think he just hopped in another window.  He's probably not sure where he is yet, but hopefully soon he'll find it's a happy place.

I will miss him (even if Gracie won't).  Rest in peace, sweet Mama's boy. 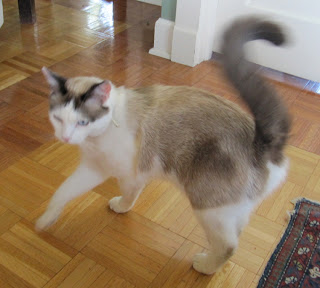 Posted by Cornerstoregoddess at 7:25 PM