Monkey King and the Peaches of Immortality 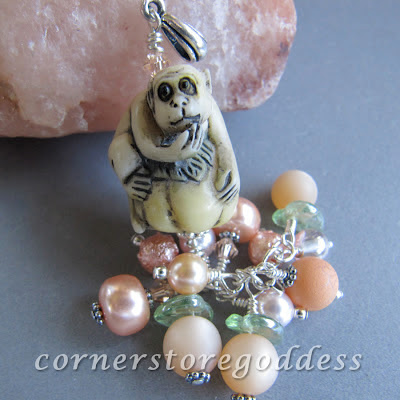 Long ago, a very smart monkey was born.  As he grew up, he was obsessed with a quest for strength and power and soon he became the Monkey King.  He could lift his 17,881 pound golden staff with ease.  He could travel 33,554 miles in a single somersault. And, with the exception of his tail, he could transform himself into any animal at all.

The Monkey King was also quite a mischievous monkey, and his antics soon became the topic of discussion among the gods.  They invited the Monkey King to join them in heaven, thinking that, there, at least, they could keep a watchful eye on him.  The Monkey King quickly accepted the invitation in the belief that he would be granted an honorable place as one of the gods. 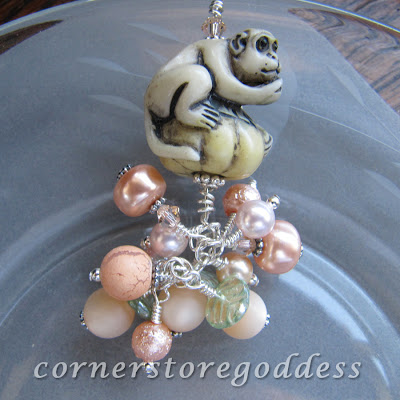 Instead, he was given the lowliest of jobs - stable boy.  And when the gods threw a lavish banquet at the empress’s jade palace, the Monkey King was not even invited.  The Monkey King rebelled and decided to make himself immortal.

As it turned out, the jade palace was surrounded by peach trees. The peaches on them ripened every three thousand years.  A single bite of one of the peaches granted not only immortality, but also great strength. 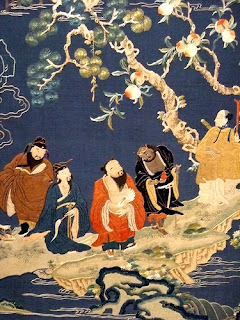 When the day of the great banquet arrived, the Monkey King sweet-talked the palace guardians into leaving him alone with the peach trees, so that he could take a quick nap.  As soon as their backs were turned, he climbed into the largest of the peach trees, gobbled up the peaches of immortality, and fled. 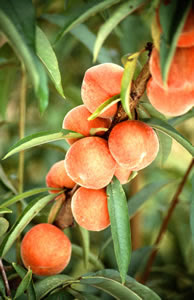 When they discovered the theft, the gods dispatched their greatest warriors, who quickly captured the Monkey King and locked him in a fiery magic cauldron.  But 49 days later, when they opened it, out jumped the Monkey King, stronger than ever.  Desperate, the gods appealed to the Buddha for help. 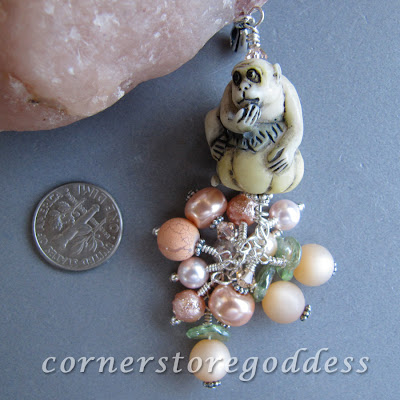 Instantly, the Monkey King took a great leap.  He flew over rivers and valleys and mountains until there was nothing but five immense pillars.  He landed on the tallest pillar with ease and there he signed his name, confident that he had outwitted the Buddha.

That's when he realized that the pillars were, in fact, the Buddha's fingers.  The Buddha then turned his hand into a mountain, with the Monkey King sealed tightly inside, and there he remained for the next five centuries. 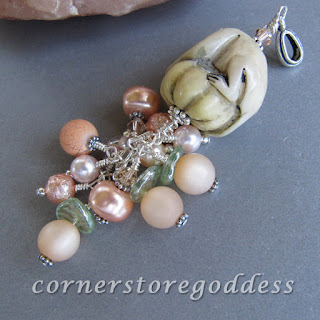 After the Monkey King was released from the mountain, he assigned the task of accompanying the great monk and scholar,  Xuanzang,  on a journey to recover the sacred books of Buddhist wisdom from India, which were associated with attaining enlightenment.  Over the course of the journey, the Monkey King finally made the decision to use his powers for good.  He became Xuanzang’s disciple, and protected the monk from demons and bandits during his epic journey.  They encountered 81 tribulations before finally accomplishing their mission and returning safely to China.  There, the Monkey King was granted Buddhahood for his service.

For the Monkey King pendant, visit my etsy shop: http://www.etsy.com/shop/cornerstoregoddess?section_id=8158616

For a more complete version of the Legend of the Monkey King, please visit http://www.aaronshep.com/stories/036.html

For a peach crumble recipe and more information about peaches (immortal and otherwise), visit http://funfoodfeed.com/